Since Covid-19 hit, I haven't done much photography and what little I did was around the homestead.  Well, we have been blessed with a spectacular event this year as Comet Neowise has passed us in the night sky.  I love night photography and Neowise has provided me with the excuse/impetus to get off my butt and do some photography.  It is also giving me a push to get back to producing my blogs.

To be honest, I haven't had much ambition for this stuff lately.  Well, it is time to pull things together and get back in the game (every blog needs several cliches so there are a few in this one).  I decided to take a trip to one of my favorite locations, Crex Meadows in Grantsburg, Wisconsin.  I picked a night when clear skies were forecast and I tossed my gear into the Subaru (the deer death machine - two so far, one at Crex).  I took a complete set of lenses to capture the comet in a landscape and a close-up.

I arrived at Crex in the afternoon and had my peanut butter and jelly sandwich for dinner.  I scouted most of the old spots in an attempt to find some nice foregrounds.  I like trees in my night shots and found several with the correct orientation to capture the comet in the sky with the trees as frames.  As darkness approached, I drove up to the highest spot at Crex, which is an overlook where you have 360-degree views.  The comet was forecast to be in the north-west area of the sky, just below the "Big Dipper".  I first caught it with binoculars just after the sunset.  I set-up the camera and got a "record" shot with the sunset glow on the horizon. 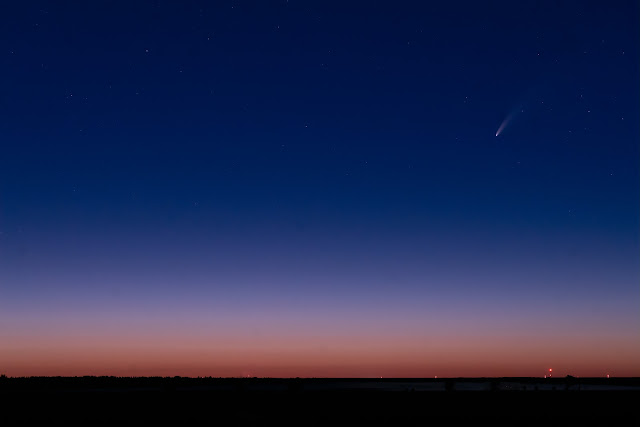 It was not yet visible with the eye, but the camera does a nice job of capturing the light.

I moved from here to my chosen location and set-up for some more interesting shots.  As the night progressed, you could see Neowise with the naked eye, but again the camera sees it much better.  Also, binoculars work well.

I ventured out on two more nights in an attempt to catch the comet in an urban environment.  One night I saw Neowise and the camera captured it, but not very well. Downtown Minneapolis looked good with the evening lights, so I shot an image of the skyline that I rather like (sometimes you just need to go with the flow).


For my third attempt (second in the urban environment), I tried the Stone Arch Bridge in Minneapolis.  This was a complete failure that I happily share with you.  The lights from downtown are just too bright to get any shot of the comet (it is there, but not visible).  I did get a nice shot of one of the bridges with a great light display.

All in all, it was fun getting out to shoot.  If we stay under control for the virus, I'll do it again.  In fact, there are some very good meteor showers in August, so I might take a trip to shoot them.  I usually do these outings with my photo buddy John, but with the virus, it is tough to do.  Maybe soon!  Stay well, wash your hands and wear your masks and we may just make it through this.
on July 31, 2020
Email ThisBlogThis!Share to TwitterShare to FacebookShare to Pinterest
Labels: Minnesota, Neowise, Night Photography