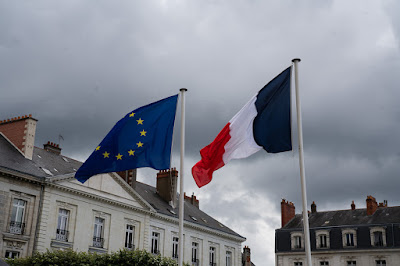 Our Grand Circle Tour (GCT) trip this year was an adventure in many ways.  We had some great food and wine.  Sampled some fine French cheese and tried the local mussels.  We were treated to some tall sailing ships and fireworks in Bordeaux.  And we happened to be in Barcelona during the Gay Pride Festival.  The trip also included several local tours were we learned about the history of the different areas we visited.  All in all, it was a busy, but fun trip.

The trip included a visit to the Bordeaux region of France on a riverboat sailing the Garonne and Dordogne Rivers.  We began our trip in the city of Nantes, followed by the river cruise, three days in Toulouse (with a day trip to Carcassonne),  a couple of days in the tiny, but lovely, country of Andorra, and finally three days in Barcelona.

I will be publishing five blogs about this trip.  This first blog covers the time we spent in Nantes.  The following blogs will document the river cruise, Toulouse and Carcassonne, Andorra, and Barcelona.  Hopefully breaking up the trip into five blogs will make it less time consuming for my adoring followers and easier to enjoy.  At the end of the blogs, I will include a link to the Google Photo albums for each area (I will try to keep the number of images in each album to 50-75).

Click here for a Map of the area visited on this trip.

Nantes was founded by the Celts in 70 BC.  It is located on the Loire River in west-central France. Our first impression of the city was not so good.  The ride from the airport to our hotel meandered through the industrial outskirts of the city and it was not very pretty!  But once we reached our hotel in the old town area of the city, we were pleasantly surprised.  This area of the city has some fine bars and restaurants and many old interesting buildings.  We had a walking tour of the old town including a visit to the Chateau des ducs de Bretagne.  Nantes is also known as the birthplace of Jules Verne, one of my favorite authors.

Our hotel the Radisson Blu Nantes was nicely situated for walking to lunch or dinner and to all areas of the old town.  We also used public transportation, the tram, to get back from the Isle of Nantes where we saw the machines (more about that below).

I highly recommend a visit to this city if you are traveling in the area!


Machines of the Isle of Nantes

The highlight of Nantes for both Kathy and me was a trip to the "Machines of the Isle of Nantes".  The machines were inspired by the works of Jules Verne.  They are extremely clever and lots of fun!  The machines move through the use of steam, gears, and pistons.  They create an abundance of noise and motion.    It was particularly fun to see the reaction of the kids to the machines (including the elderly kids in our group).

These are some of the machines including the most famous machine the Grand Elephant.

The machines visit also included a ride on the merry-go-round for us older folks (who are really young at heart).  The carousel was huge and included rides on two levels.

We ended the Nantes portion of the trip with a bus ride to the ship in Bordeaux.  Along the way, we spent some time in La Rochelle.  Located on the Bay of Biscay, La Rochelle is a beautiful little town which was featured in the Alexandre Dumas novel "The Three Musketeers".  We had a walking tour then a nice lunch.  Weather was gorgeous and the trip to our ship was relaxing and interesting.

Nantes was a great start to our trip!  I've added more photos to a Google album which you can view here: Nantes Photo Album.
on July 08, 2019
Email ThisBlogThis!Share to TwitterShare to FacebookShare to Pinterest
Labels: France, Travel