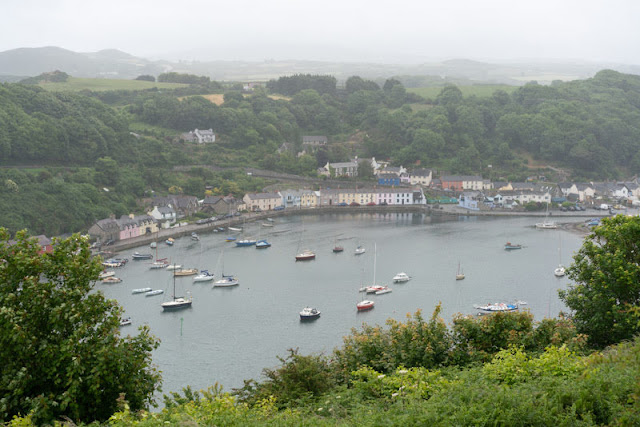 Many famous people hale from Wales:

We made two stops in Wales which was way too short.

Fishguard is a small seashore village in Wales.  It has been making an effort to bring in more tourists to supplement their economy.  To accomplish their goal, the women of the town spent years sewing a tapestry that is modeled on the Bayeux Tapestry (in France) and depicts the last invasion of the British Isles.  This occurred in 1797 when the French landed at Fishguard.

Jemima Nicholas, seen here greeting our group as we disembarked in Fishguard, captured 12 French soldiers with only her pitchfork!  Must have been some tough, determined Frenchmen.

What a great smile!  The Welsh are friendly people for sure.

In the afternoon, we took a tour of the famous St. David's Cathedral.  The town of St. David's is the smallest town in Britain and is very charming.  The Cathedral is massive, with wooden ceilings and a huge pipe organ.

Our second day in Wales include a visit to Canaerfon Castle, a drive through Snowdonia National Park to the slate museum in Llanberis, and a stop in the Welsh town of (oh hell I can't spell it much less pronounce it - see the attached image!)

Canaerfon Castle was built by Edward I, but never totally completed and many of the interior buildings did not survive.  The walls, however, are still intact.  Edward spent little time here.  However, his son Edward II was born here and was named the first Prince of Wales.  The castle was mostly completed by 1330.

The drive  through Snowdonia National Park was lovely.  The weather was overcast and made the greens of the mountains and valleys stand out.  The mist added a mood to the drive which we all enjoyed.  We ended the drive at the National Slate Museum in Llanberis.  We had lunch in one of the buildings used by the miners and had a simple stew like they had for their lunch.  We then had a slate splitting demo. by Ewan, an excellent craftsman and a truly funny guy.

Next time, we drop anchor in Ireland, including Dublin and Belfast!
on July 06, 2018
Email ThisBlogThis!Share to TwitterShare to FacebookShare to Pinterest
Labels: British Isles, Travel, Wales